With the weather having its say on the fixture schedule the last 3 weeks we look back at all the action.

Just the 3 fixtures during the second weekend of the half term break. The Under 17 Girls kept up their 100% record in the league with a 5-3 victory over Kinver Colts. Nykeshia Reed made it 11 for the season with a brace with Lauren McCaffrey, Kaitlyn Richards and Abbie Norry also on the scoresheet. Whilst the Under 18 Girls suffered a heavy defeat away at Boldmere St Michaels, the Under 11 Boys face a friendly against the District side; a side made up of 4 Telford players. Despite being on the wrong end of a 6-2 scoreline, it was a positive result for the club with all the goals coming from Telford players.

Following the half term break, it was a return to action for our Youth sides. We start our round up with the Under 15 Boys who were looking to make it 3 wins on the bounce with Bedworth United the visitors. It was a dominant performance from the young Bucks as they ran out 9-2 winners. Hanoch Boayke (2), Jake Evans (2), Brian Castle, Charlie Timmins and Jayden Williams were amongst the goals. Matthew Cutler was the man of the match not only picking up a brace of his own but also 5 assists.

The Under 13 Boys kept up their good run of form and pressure on the league leaders with a 3-0 victory over Droitwich Spa. The 3 points were secured thanks to goals from Alex Sharpe, Sam Ross and an own goal. Despite goals from Oliver Grice (2) and Bradley Evans the Under 10 Boys fell to a first defeat since the start of the season at home to Boldmere St Michaels. The Under 12 Boys were also on the wrong end of a defeat against the same opposition.

Our Under 14 Boys found themselves us against a resolute Stafford Rangers side. Despite dominating the game for large spells they were unable to find a breakthrough and were forced to share the points. Meanwhile it was a local derby for our Under 16 Boys against Shifnal Town. Similar to the Under 14s they were forced to share the points, Ethan Relf with the Bucks goal.

The Under 15 Girls battled the elements to pick up a convincing victory over Prees in awful weather conditions. Jess Walley continued her good run of form with a brace as did Courtney Castle. Elle Morrissey and Mia-Jay McCarthy completed the scorers.

The Under 11 Girls for the third time already this season were winners against Shifnal Town thanks to goals from Addison Davies, Morgan Howells and Rosie Davies. Meanwhile the Under 11 Boys kept up their 100% start to the season with a 2-0 victory over Wyrley Juniors in the MJPL Trophy; Jacob Jones and Josh Hicklin with the goals. Despite two goals from Ethan Pickford and one from Dan Gormley, it couldn’t prevent the Under 18 Boys from falling to a 4-3 defeat at home to CS Colts.

We end our round up with the Under 10 Girls who picked up their first victory of the season with a great performance against Newport Girls. Jasmine Mills picked up a hat trick with Peyton Findlater, Aaliyah McAuley and Ellie Scrace also on the scoresheet.

Once again the fixture schedule was hit by the weather but we bring you all the action from the 8 teams that did manage to get some game time starting with our Under 18 Boys who were looking to get back to winning ways with a tricky trip to face in form Stafford Rangers. It was Dan Gormley once again who was amongst the goals with a hat trick. Sam O’Brien and Mike O’Toole also netted as they ran out convincing 5-1 winners.

In the local derby between the Under 12 Boys and Allscott, the spoils were shared. Lewis Upton netted for the Bucks but they couldn’t find that elusive winner and were forced to share the points. Meanwhile the Under 10 Boys were edged out by a single goal away at Oldbury United.

Both our Under 10 Girls and Under 13 Girls were in Shropshire Charity Cup action this weekend and both booked places in the semi finals. The Under 10 Girls were winners against Newport Girls thanks a Jasmine Mills hat trick, two for Ellie Scrace and Lily Shervill. Meanwhile the Under 13 Girls were 5-0 winners at home to Oswestry thanks to goals from Lacie Everton-Holden and two for both Eden Wallace and Frances Creen.

The Under 14 Boys had a day to forget losing at home to league leaders Stratford Town Colts, despite another goal for Preston Whinnerah whilst the Under 16 Boys were edged out by the odd goal in 5 at home to Mickleover Sports, Reece Clayton and Alex Holland with the goals for the Bucks.

We end our round up with the Under 11 Boys who to data had recorded 8 wins from 8 games. Up against them and stopping them from making it 9 was old foes Studley Juniors Bees, a side they faced 5 times last season in league and cup as they battled out on all fronts. It was a close fought contest against a side who retained the ball well but an expert counter attacking performance from the young Bucks gave them the win on the day thanks to goals from Jacob Jones, Cole Dexter, Isaac Bateson and Aiden Rowland. 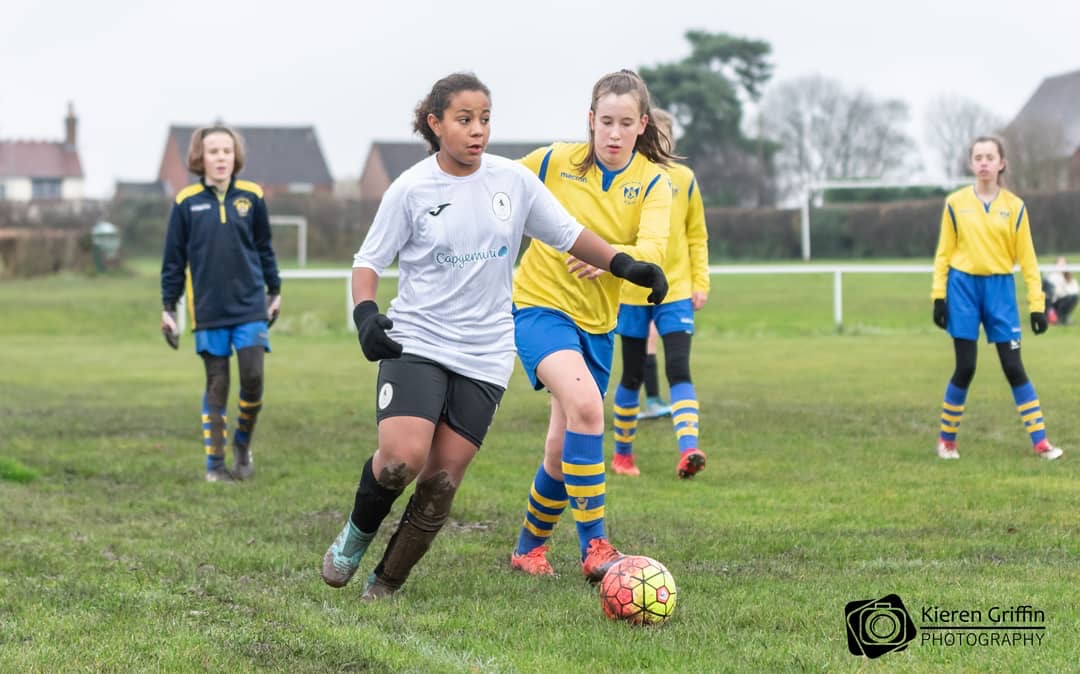