AFC Telford United’s New Bucks Head stadium is considered to be amongst the best non-league grounds in the country and holds a football league ‘A’ grading.

Construction of the new stadium commenced in 2000, replacing the Bucks Head ground which had been home to Wellington Town and Telford United for over a century. Although the Bucks Head held a special place in the hearts of many supporters, it was in desperate need of renovation.

In the 1999/2000 season, demolition work began on the Railway End terraces, albeit slowly at first. The following season, the new stadium slowly began to take shape. Telford United played with only two terraces in operation, with a small temporary stand situated on what is now the Jack Bentley Terrace and portacabins in the car park were used for changing rooms.

The stadium was finally completed in 2003 and can hold 5500 supporters,

The stadium development was complemented by the construction of the AFC Telford United Learning Centre, positioned behind the Jack Bentley Terrace, which is where the club offices, bar, meeting and education rooms are housed. Click here for more info (Please can this link to the commercial tab in meetings and events section).

AFC Telford United is a community club and is fully committed to providing equal access to all. The New Bucks Head stadium has the following disabled facilities:

The club normally operates a single disabled entrance, which is in the corner of the ground where the Sir Stephen Roberts Stand and the David Hutchinson Stand meet. The entrance can be found between the club shop and the control tower.

On certain occasions, the club will operate a second disabled entrance at the A5 end of the Sir Stephen Roberts Stand, which will give access to the disabled area of the Frank Nagington Stand where visiting supporters are housed during segregated games.

There are two disabled toilets in the stadium, located beneath the Sir Stephen Roberts Stand and the control tower. 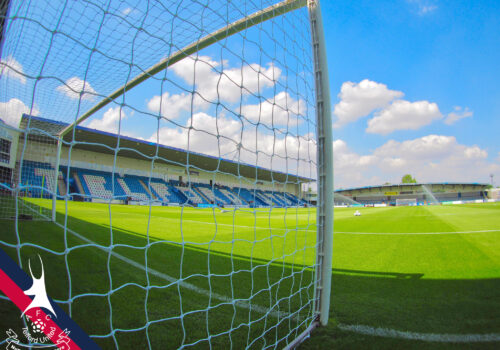