Current assistant manager Phil Trainer is well known with supporters for his goal-scoring exploits from midfield which endeared him to Bucks fans during his Telford career.

There is one goal however that is remembered more than any other and is still talked about to this day.
The former midfielder made 46 appearances during the 2010/11 campaign scoring 14 goals, however there was one fixture that he was unavailable for due to his sister’s wedding.

“I remember playing in the first leg at Nuneaton on the Wednesday evening and then flying on holiday the next day, so I was unavailable for the second leg on the Sunday.

There was no twitter feedback then, so I remember asking a friend of mine to keep me updated for the second leg which he forgot to do. I was ringing around trying to find the score, but no one was answering their phone so I ended up getting a text from the gaffer to tell me we had won”

Plans were in then in motion for Phil to leave the family holiday early and fly back for the final, something which had been discussed earlier in the season.

“To be fair, when I first spoke to the gaffer in the middle of the season about going away, he asked me to make sure we got promoted by winning the league so there was no need to plan anything around the play-offs.

Nothing was mentioned again until we got a bit closer to the end of the season when he asked me If we get through the second leg and into the final would I fly back earlier. The family agreed to allow me to come back and the rest is history.

I landed back on the Friday afternoon and we trained the day before the game, but it all felt a bit of whirlwind because within 48 hours I had gone from being on holiday to preparing for a play-off final.”

When asked about how Phil remembers the game going, Trainer was no ashamed to say he felt Guiseley had been the better side for some periods.

“It was an even game during the first half but if I am honest the second half, they were the better side, Guiseley had the line share of possession and the better chances.
We brought liam Murray on and as soon as he scored the momentum shifted back towards us and from there with the home advantage, I felt there was only going to be one winner”

The build up the goal is still fondly remembered within Phil’s head with the match referee playing a key role before the goal.

“Before Jon Adams picks the ball up and plays it out wide he get caught for a foul but fair play to the referee as he could of pulled it back for a free kick but he plays the advantage in our favour.

I always say a striker is the best crosser of the ball as they know where they would want it to be. I remember Andy Brown crossing it and I try and lose my marker, I go inside him and by the time the ball comes in it ends up in front of me, it’s a bit of an awkward header I remember heading it down and back across goal, the ground goes mental.

All the fans run on, because I scored the winner all the supporters seem to run to me and I am celebrating with the fans, little did I know all the lads had gone in so I missed all the celebrations in the changing room as I am still on the pitch

We go back out onto the field for the presentation and do a lap of honour It was all done a bit quick and I don’t remember taking it all in properly, I think I was still in shock of what had happened”

When asked about what he remembers of the night’s celebrations, it was not what you would expect from someone who just scored the winning goal in the play-off final.

“My lad had been ill while I was on holiday so I had in fact brought him back with me, his nan ended up looking after him for me so I ended up collecting him from her house and putting him to bed and watched telly on the sofa at home while all the lads went out to party it was quiet surreal”

When Phil looks back now, he remembers that moment as the best moment of his football career

“There is no doubt that it was the best moment of my career, even now I watch It back and I still get Goosebumps when the ball hits the back of the net and you hear the crowd cheer, it was a fantastic day and it will live me with for the rest of my life” 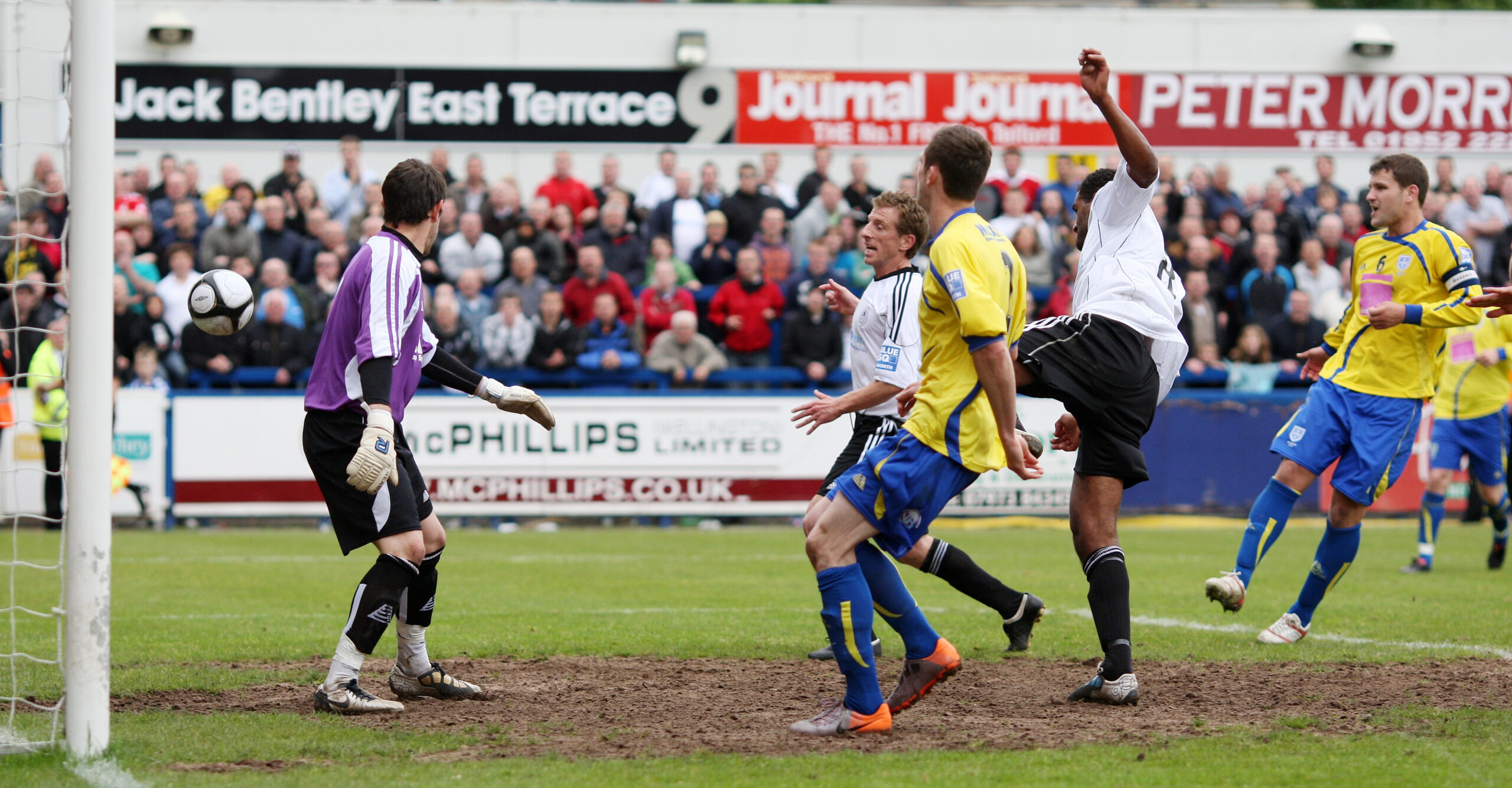 Dear Supporters, We are still waiting for an updated statement on the current season 2019/20...

AFC Telford United have been drawn away to Stourbridge in the Buildbase FA Trophy Third...

Vaccine Centre To Open On Tuesday

AFC Telford United are delighted to announce a partnership with Wellington Pharmacy which will see...