Telford, who sit 13th in the National League North have not played since March 16 due to the coronavirus pandemic.

The season began with some new faces as the likes of Adam Walker, Aaron Williams, Chris Lait, Arlen Birch, Matt Yates, Lewis Reilly, Riccardo Calder and Billy Sass Davies all came through the door early on in the campaign. The new additions helping to raise the hopes of Bucks fans alike who were eager to see just what the fresh blood would offer the side.

The year before saw the Bucks progress to the latter stages of the FA Trophy and only miss out on the play-offs by goal difference, nevertheless a new campaign brought new optimism and a positive thought of what could be.

August was a mixed month with three wins in a frantic period as games came around the corner thick and fast. The Bucks most memorable result of the month might be the first victory of the season against Kidderminster where under the floodlights at New Bucks Head Aaron Williams bagged his first goal, with Darryl Knight also on target in a two nil victory.

Manager Gavin Cowan`s verdict after the Kidderminster game: “I’m really pleased with how the lads carried out the game plan, I thought we stuck to the task really well against a really good side, in and out of possession and I thought we were really good for the win.

Brendan Daniels was at the double when his contribution helped the team pick up a 3-2 win away to Bradford Park Avenue as this ended the month on a high.

The Bucks putting two prior defeats behind them after picking up losses to Leamington and Kings Lynn Town in the space of a few weeks alongside Hereford. In between that period there was also a gritty and plucky performance which meant Telford picked up another three points on the road when Andre Brown tucked a penalty away against high flying Southport.

Then came the month of September with only one win on the board where the Bucks also suffered an early exit in the FA Cup to Nantwich Town following a three nil loss. The fine win was won in dramatic fashion after the Bucks found themselves two nil behind at home to Gloucester City before pulling themselves right back into the game and eventually taking the match 4-3 with goals coming from Brendon Daniels, Shane Sutton, Williams before Marcus Dinanga fired in the fourth.

There were two further defeats to Chester at home with a 3-1 defeat as well as a loss to Blyth Spartans at the backend of the month which mirrored the same score line.

Cowan’s speaking after Gloucester City match: “I’m very pleased, it would have been nice to get four nil but to get more goals than the opposition is the main aim. (On Daniels) I’m very happy, goals are obviously a bonus and they’re very important but his performance’s on top of that, he deserves full credit and he has worked his socks off in the last two games.

There was limited matches in October as the Bucks went the month unbeaten and picked up an impressive 4-1 triumph over Guiseley where Aaron Williams took the match ball home following a hat-trick. This was followed up by a valiant effort against league leaders York City who found life difficult on their trip down to Wellington with James McQuilkin getting an equaliser in a game where the Bucks could have easily walked away from with all the glory.

McQuilkin said in October: “There’s been a few changes, we have bought a few players in and they have helped us massively. It was the case of believing in what we’re doing and continue to do what we`ve been doing and continue to do the right things. We haven`t let ourselves get too down. You want a feel good factor and as soon as that happened against York you could feel the lift within the squad. ”

The month of November ended as well as they could have wanted after easing to victory at Guiseley once more but this time in the FA Trophy which saw a brave and dangerous Bucks side tear down the hosts at Nevermoor Park.

Marcus Dinanga who was Bucks top scorer this season also got his season really going following a hat-trick at Darlington where the Bucks overturned a losing margin to win up North.

The month did not start as well they would have wanted with defeats to Boston United and Curzon Ashton coming. It was the match against Spennymoor Town mid way through the month which sparked the catalyst for a comeback after been two nil down. This seemed to raise the spirits of the players who responded by producing two wins commencing the draw and ensuring the Bucks were looking upwards rather than downwards.

Cowan’s speaking after Spennymoor match: “It’s one point at home, you ask for three. What I asked from the players before the game was a performance and I thought they did that. I think we lacked a bit of first contact defensively, all over the pitch. 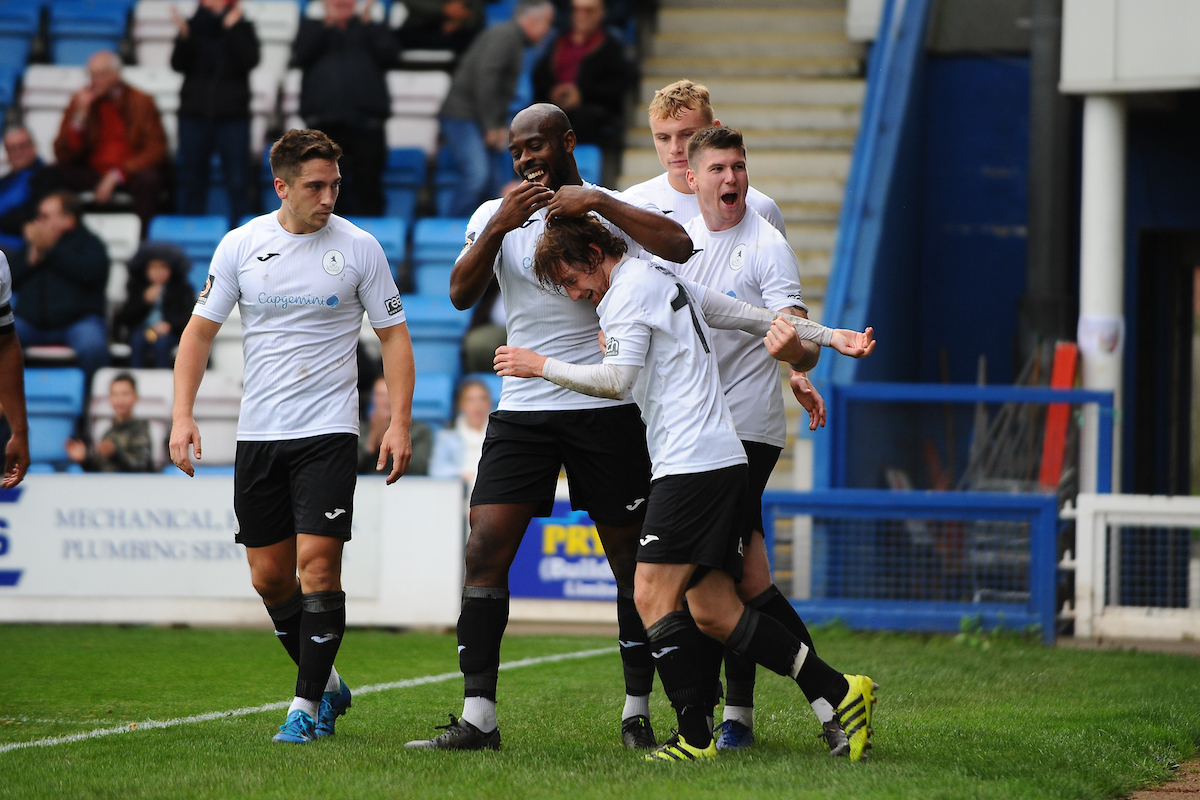 The Bucks begin the bank holiday weekend with a trip to Merseyside to face Southport on...

The National League has this afternoon confirmed that Tuesday’s game against Hereford has been...

Our stadium advertising is not just seen by all the crowds on a AFC Telford United match day, it is...