The Bucks experienced a tough December where at least during the late stages of the month their form rose significantly. It was a difficult start conceding seven goals in two of their home matches which included them getting dumped out of the FA Trophy commencing a 5-0 home loss to Leamington.

Things however did improve as the month went on with a dogged and astute display against Chester who were right in the mix for promotion picking up one point in a 0-0 game. The Bucks seemingly finding their feet and picking up some momentum which lasted the duration of the month. Then came the Bucks performance of the month when they dispatched Alfreton Town 3-0 in a commanding performance which saw Ryan Barnett get on the scoresheet alongside Matt Stenson on top of an own goal. Barnett putting in a man of the match display to show his willingness to help the team and put joyous smiles on the face of all Bucks fan alike.

It was then a trip to Gloucester City after securing two wins on the bounce, something that eluded the Bucks on several occasions during an inconsistent term. Nevertheless a goal from Stenson got the job done down in Evesham, with a major defensive improvement from the defence to the forward line showing a new found Bucks resilience.

Then came the month of January after the Bucks picked up another point on the road to continue their resurgent state after a 1-1 draw with Alfreton, as James McQuilkin ensured he was in on the action. There were then two tough matches against teams who were right up in the battle to fight for promotion with Brackley coming to New Bucks Head and taking a one nil victory; with on loan goalkeeper Matt Yates making a penalty save which could only keep the score down. Before the Bucks almost managed to snatch a point at high flying York. As if it not were for two late goals meaning heartbreak then the Bucks, who had held their heads high anyway then they may have picked up a deserved point; York took the game 2-0.

Goalkeeper Yates said: “It’s a fantastic club, with some great people, the gaffer and players have made me feel welcome. The lads are fantastic , they made me feel like part of the team straight away which is what you want as a lad coming into a men’s environment and they made me feel at home right from the off.”

Stenson was the scoresheet again after hitting the opener in a clash with Farlsey Celtic which subsequently ended 1-1 after a late goal by the hosts. To end the month the Bucks picked up a fantastic victory against Blyth Spartans after putting them to the sword with Aaron Williams, Barnett and Shane Sutton all contributing as well as an own goal.

Then came the month of February where there were two back to back matches between Altricham with the first ending in a 2-2 draw where Adam Walker and Marcus Dinanga were both on the scoresheet at home. Before a thumping on the road saw the Bucks collapse at the back by shipping in five although Brendon Daniels and Dinanga found themselves getting the goals on the day.

Barnett said:“I live in the area and when I was younger I know it’s split loyalties, but I would watch Telford and Shrewsbury, when Shrewsbury wasn’t playing I would watch Telford and would come down with my mates.
“I used to sit in the stands and think I am going to be on that pitch someday, you just want to be playing football and to be playing there is unbelievable.”

Dinanga’s hot streak in front of goal was just getting started at the striker was instigator in a 2-1 victory against Guiseley where after initially falling behind the strikers clinical nature proved definitive in the Bucks taking the win. Then came a one nil loss to Boston United who just simply outclassed the Bucks on the day taking a deserved one nil victory away. The goals were flying in nevertheless and Dinanga was in the mood for more goals where he managed to attain a brace as well as Daniels getting on the scoresheet in a 3-3 draw to Spennymoor.

Then in March came a rather frustrating 2-1 loss at home to Darlington where for some reason home form was not apparent and the goals scored were not as frequent as they would have wanted; Dinanga was on the scoresheet once more. It was then time for what would be the final matchup of the season where Ryan Sears who signed during the week scored on his first start, before Williams and Barnett helped to end the campaign with a captivating performance albeit in unusual circumstances.

Goal scorer Williams said: “I should’ve scored a lot more, the chances I have had and the chances the boys have created for myself, I should be on a lot more as ten goals near the end of the season is not good enough for myself. I scored twenty one goals last time I was in this league before Christmas.
“I always have high expectations of myself to score goals, when the gaffer bought me in he knew what expectations I had and I knew what he had for myself and the manager deserves credit.”

The Bucks season coming to a sudden halt, yet it was a season that produced the highest of highs and the lowest of lows just like any other season for that matter. Whether it be Dinanga’s habit for scoring and firing on all cylinders or watching special players like Barnett and Daniels light up the stadium with their flamboyant application and tremendous trickery. With the uncertain future of when football will continue, one thing that still stands is the Bucks will take back to the field at some point. 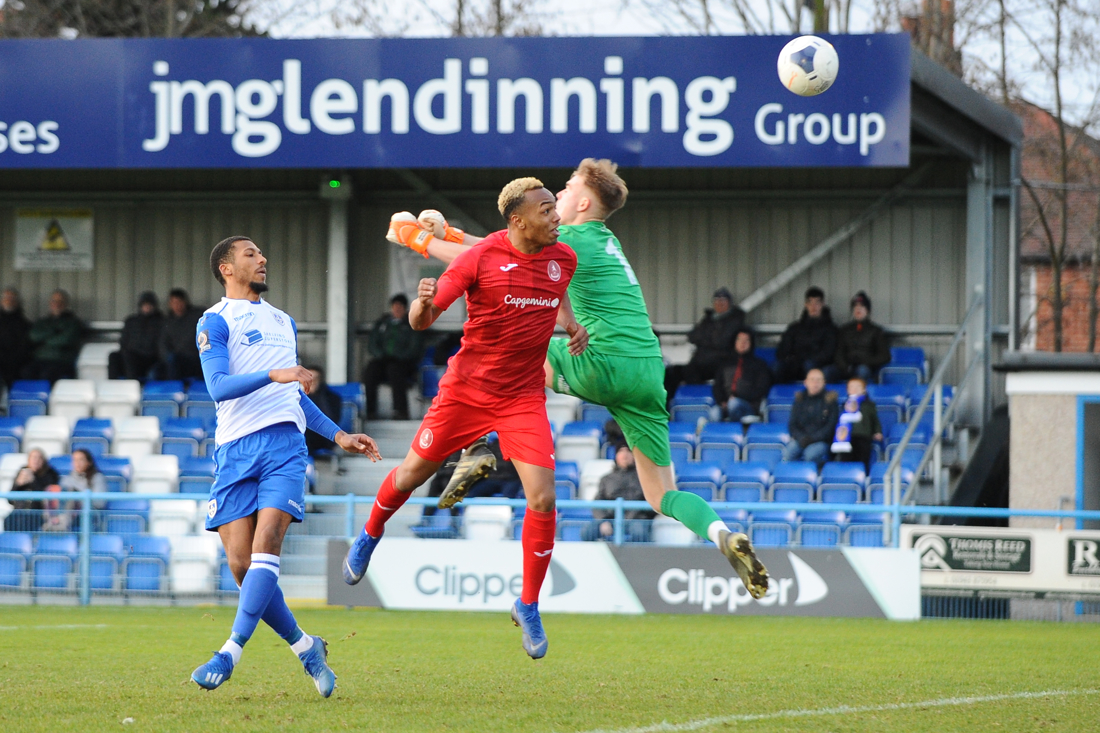 AFC Telford take on Spennymoor Town at the New Bucks Head this Saturday. After an up and down...