The National League North club have teamed up with TicketCo to offer advanced sales and online purchases for the first time ever.

The new system will be in place in time for the three pre-season friendlies scheduled at New Bucks Head during the month of July.

TicketCo are used by many football clubs, including Scottish Premiership side Kilmarnock, to deliver hassle-free online sales for fans.

The new system will enable the club to create a database of fans to connect with regularly, reduce queuing times at the turnstiles and provide special group deals – including offering all three pre-season games for the price of £21.00 for adults, £15 concessions & £10.00 for 16-19 year olds.

The Bucks will still accept cash payments on matchdays but have also invested in a new ticket office which will be based outside the David Hutchinson Stand to further reduce pinch-points at turnstiles near kick-off time.

Luke Shelley, AFC Telford United Operations manager said: “TicketCo tick all the boxes for us. It’s a slick operation that will benefit the club and the fans.

“We first came across them when we played Solihull Moors away in the FA Trophy last season.

“They already use TicketCo and so we got to see what it was like as away supporters to buy tickets in advance online.

“We were really impressed with how it worked; how quickly supporters got into the ground, how people could book in advance and how you could easily book online.

“We feel it’s going to be a fantastic partnership for the club.”

AFC Telford United were formed 15 years ago after the collapse of Telford United and have always operated a cash-on-the-day ticketing system. Bringing in the option of advanced sales is expected to offer several benefits to the progressive club.

“It’s always been cash on the turnstiles here,” said Mr Shelley, “but going forward with modern technology should help all supporters, young and old, and increase revenues for the club.

“With this new system we can offer bundle deals for matches which might mean someone will come to a Saturday and a Tuesday game, rather than just pick one.

“We can also build a database of fans, which we’ve never had before, so we can communicate with them regularly and offer special deals. We can also find out if fans are coming when Shrewsbury or Wolves are away, or mainly around Christmas, or on Bank Holiday Mondays when the Premier League and EFL don’t have games.

“With cash turnstiles we would also get everyone arriving straight from the pub or after getting food at 2.45pm and you could get some queues, so with a new ticket office and advanced sales we will be able to use our stewards and staff to help get people into the ground much quicker.”

David Kenny, TicketCo UK Country Manager, said: “It is great to have partnered with such progressive and community focused football club as AFC Telford United. We are very much aligned in our approach of putting supporters first and look forward to continuing to work closely with the club to use our technology to improve the fans’ experience.”

TicketCo’s technology is designed to make event payments quick and easy for both organisers and consumers, thanks to its pioneering technology. The platforms’ technology is compatible with Android and iOS devices and enables organisers to promote offers on food, drink and merchandise in advance of events.

TicketCo has offices in Norway, the UK, Poland and Sweden. It has partnerships with several football clubs, including SK Brann, Molde FK and Legia Warsaw.

Tickets are now on sale for our home pre-season fixtures. Supporters can purchase individual games or choose to take up the offer of our three-game bundle for a discounted price. 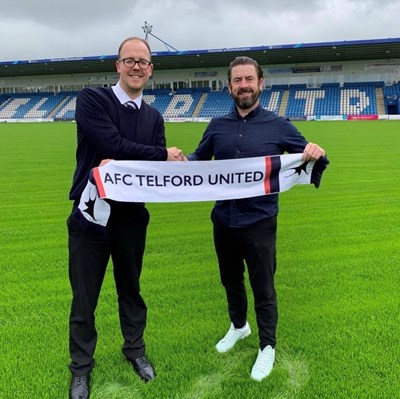 Five things to look forward to

With the Bucks returing to National League North action tomorrow, Jamie Morris looks ahead to three...

AFC Telford United would like to advise supporters and visitors to our site on measures that are...

AFC Telford United will travel to Kings Langley in the FA Trophy 2nd Round this weekend.  The...