AFC Telford United are delighted to announce the signing of forward Montel Gibson from Ilkeston Town on loan until the end of the season.

The athletic 24 year-old striker will be known to supporters for his goalscoring exploits having scored regularly for several seasons at Halesowen Town netting 31 times in 46 league and cup appearances for the Yeltz during the 2019/20 season.

His goalscoring prowess saw Halesowen in promotion contention in the Southern League Division One Central and the Yeltz also memorably reached the semi-finals of the FA Trophy before the pandemic brought an early end to the 2019/20 season.

Montel’s exploits had not gone unnoticed though and in the summer of 2020 he was signed by Ian Holloway on a three-year deal for Grimsby Town. The Mariners endured a turbulent 2020/21 campaign, however, that ultimately saw them relegated back to the National League. Montel notched three times in 23 appearances in all competitions for the North East Lincolnshire outfit but later fell out of favour with new boss Paul Hurst after he was appointed as Holloway’s successor in December 2020.

Gibson joined Stourbridge in July 2021 and will be known to Telford supporters after the forward scored twice for Stourbridge in the FA Trophy clash in December 2021 against the Bucks.

“I am excited to be joining AFC Telford United on a season long loan. I spoke to the gaffer, and he made it clear what he wants from me, and I am ready to take on this challenge. I am happy to be part of this great club and I am look forward to playing in front of the fans. I am sure the lads, management and myself will work hard to get the club moving up the table in the right direction”

Boss Paul Carden spoke of his delight at finally securing his centre forward target “Montel is someone we looked at some time ago, he’s strong powerful, knows where the back of the net is and will give us a different dimension in how he plays. His goal record is exceptional, and we hope he continues with that with us this season. He was determined to come to us and that is what we are looking for. I am really looking forward to working with him”

Subject to clearance from the National League and FA, Montel will be available for selection for this evening’s home fixture against Brackley 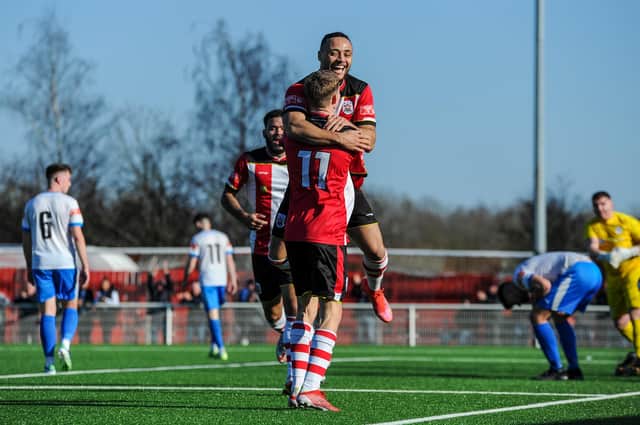 AFC Telford United remain a point clear at the top of the West Midlands Regional League North after...

AFC Telford United can confirm we have a reached an agreement with Josh Dugmore to cancel his...