Many teams have experienced the joy felt by AFC Telford United on Sunday 15th May 2011 the day they came from behind to record a dramatic victory over Guiseley and book a place in the Conference Premier, the topflight of non-league football.

Yet this was different, this was the culmination of seven years of hard work to restore top class non-league football to Telford and those that have followed the fortunes of the town’s senior team over the decades.

At the forefront of this was Lee Carter….

Following the re-birth as AFC Telford United, led by the supporter’s trust, Lee faced the daunting task of dragging a new club back up three divisions to its once proud position.

What happened next needs no introduction but seven years, three promotions, and a further two managerial changes later, the Bucks were back where their predecessor had once been.

“That promotion final seemed to cram into 90 minutes every emotion that we’d been through since reforming the club in 2004. The worry, the fear, the trials, the tribulations, being written off and, in the end, sheer joy, elation, pride and relief. My abiding memory was one of relief. We had done it. We had fulfilled the promise made in 2004”

The final chapter in the club’s return to non-league’s topflight was sealed well ahead of schedule in the most dramatic fashion by Phil Trainer’s remarkable late winner.

“Phil Trainers winner was not just a winning goal. It was justification for the sweat and tears that had been toiled on behalf of the club by so many. It was pay back for the thousands of miles travelled and money spent by our loyal supporters. It was the return of one of the greatest names in non-league football back to the top level. It is the ‘Never Forget’ moment of a Golden era.

It also proved that with commitment, pride passion and determination to never give up from every quarter you can achieve anything”

That memory will always live with Lee as well as many Telford supporters who like Lee continue to back Gavin and Phil during the modern era.

“That memory, which still provokes tears of emotion now, lives long in the minds of everyone who was there and who had played a part. But I also believe that the desire to repeat that feat also burns in the hearts of those still at the club now. The names may have changed but the dream, I am sure, remains the same. Numquam Obliviscere. “ 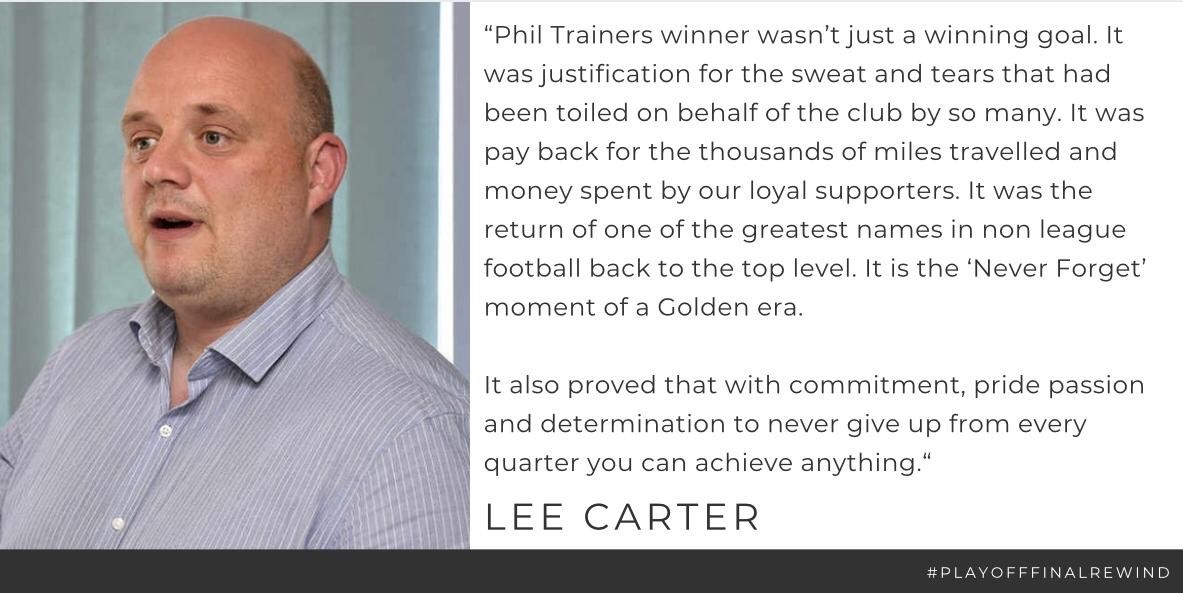 The National League has distributed resolutions this evening for Member Clubs to consider the...

Season Review Part 2 By Jamie Morris The Bucks experienced a tough December where at least...