Gavin Cowan and his men travel to the J Davidson Stadium tomorrow night for the rearranged National League North clash against Altrincham.

Altrincham FC’s ground is situated on the corner of Moss Lane and Golf Road, about a ten minute walk from Altrincham town centre. As the town-centre end of Moss Lane is one-way, leading away from the ground, there is no vehicular access to the ground from the town centre from the junction with Stamford New Road.

Please also note that there is no public parking at the ground itself. However Altrincham have had an agreement with Aecom on Moss Lane (formerly Riley’s Snooker Hall) over the use of their car park.
Altrincham urge supporters to use the car park and thus alleviate the parking problems around the ground and surrounding roads.

The car park will be locked at 11pm. There is no charge for users of the car park.

The address and post code of Aecom is 179 Moss Lane, Altrincham WA14 8FH.

Otherwise, on-street parking is permitted except where indicated by yellow lines or traffic cones.
Exiting from rear of the rail/tram station: If you have arrived by tram you can use the station footbridge to arrive at the rear exit. From here go forward 100 yards or so and turn right onto Oakfield Road. At the first set of traffic lights, turn left onto Moss Lane. Walk for about 8 minutes, passing a park on your right and crossing a mini-roundabout, till you reach the ground on your left.

Directly opposite the ground are shops which include a chip shop, bakers and two convenience stores/newsagents.

By Car or Coach to Moss Lane

From the SOUTH (M6)
Leave M6 motorway at junction 19 (Manchester and Airport sign). Join A556 and follow Airport signs to M56. Do NOT take the M56 but carry straight on at roundabout on A56. At first traffic lights (1 mile) turn right for Bowdon/Hale (B5161). Carry on for 1 mile, passing The Quality Hotel on the right. Go through the traffic lights, then right at the mini roundabout into Hale Road (avoiding town centre). Carry on for approximately 1 mile, turning left into Westminster Road (opposite cemetery entrance). Carry straight on for approximately 3/4 mile into Moss Lane, the football ground is on the right.

Tickets for all matches will be pay on the gate.

Away fans are mostly housed in the open Hale End Terrace at one end of the ground. Away fans can also sit in the Carole Nash Main Stand

The Community Sports Hall is open for every first team match and all proceeds go directly to the club.
The bar is equipped with several HD TV screens and a Premier League match is usually shown.
Food and non-alcoholic drinks are also available at the permanent catering facility at the Golf Road End and from the mobile canteen at the away end, both of which are open for all first-team game

Otherwise, a few minutes’ walk along Moss Lane is the King George pub, which is a JW Lees outlet. This pub also has Sky Sports and serves food. With the Main Stand behind you, turn left along Moss Lane and the pub is down on the left just past the garage. If you have more time on your hands then Altrincham town centre is around a 15 minute walk away along Moss Lane (with the ground behind you turn right) where there are plenty of pubs to be found.

Plus there is a Wetherspoons outlet called the Unicorn on Ashley Road. Across the road from the Moss Lane Ground is the handy ‘Good Catch’ Fish and Chip Shop which is open from 4.30pm on weekdays. 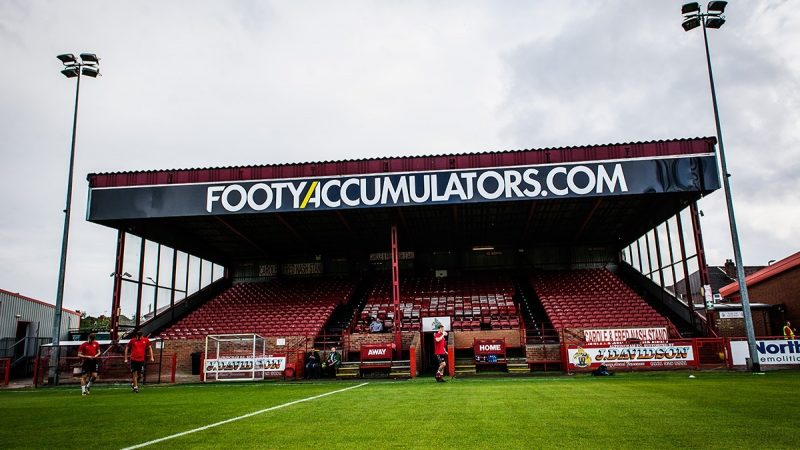 AFC Telford United begin the bank holiday weekend with a trip to Merseyside to take on Southport at...

The Bucks make the long trip to Northumberland to face Blyth Spartans this Saturday. Since reaching...

AFC Telford United would like to remind all supporters that as friendly club open to all, we expect...