Do you have ‘AFC Telford United – The App’ on your smartphone?

If you do, then you’ll want to update it, because a new version is available, with some great new features developed by Element16 Media.

If you don’t have the app, then the best time to download it is now, because you won’t want to miss out.

Fresh from the app stores, there is a brand new version of ‘AFC Telford United – The App’ and in this article, we will be detailing all the new features that can be found within version 1.3.2.

The Live Game Centre remains an integral part of the app, allowing users to interact with the match in real-time with lineups, scorers, in-game statistics, and much more. In this update, the Live Game Centre returns like never before, packed with new features, reduced loading times and improved reliability. The all-new features include:

The Live Game Centre is now more accessible than ever before and can be accessed at the touch of a single button. The section can be seen on the navigation bar, denoted ‘Live’ or by clicking the hero image on the homepage of the app. It is important to note that the ‘Live Game Centre’ button is no longer visible on the homepage of the app as it is now accessible in alternative ways.

The new Live Game Centre now includes a live match clock which gives the user a greater feel for the live aspect of the game and increases precision on the match status data.

The attendance at the ground of the current AFC Telford United fixture will be updated as soon as the media team has it and this can be found under the ‘Ground Name’ in the main section of the Game Centre.

The data from the Live Game Centre has now been split handily into sections. These sections have names ‘Lineups’, ‘Stats’ & ‘Live’, this gives the user more options as to which pieces of information they wish to view at any one point in time, and all of this is available at the touch of a button!

The lineups section remains one of the most popular features of the app with users being able to log on and instantly see the lineup of both teams. Element16 Media are proud to announce that this section has become more visual and interactive than ever before with the introduction of lineups icons – instantly see whether players are on the pitch, how many cards they have picked up and how many goals they have scored so far in the match.

This was requested by the fans so we delivered! Live in-game commentary from BBC Radio Shropshire can now be accessed via the Live Game Centre under the ‘Live’ section. Furthermore, this low-latency feed provides the most real-time audio stream from the commentary team following the bucks from week to week. There’s no need to stay on the ‘Live’ section either – feel free to browse the rest of the Live Game Centre or the rest of the app whilst listening to BBC Radio Shropshire – just use the buttons to start and stop the feed and you should be good to go!

Man of the Match Voting

Want to have your say on the man of the match? Well, now you can! Each device with the app downloaded has one vote to decide the Fan’s Man of the Match. Voting will commence at approximately 80 minutes into the match and will last for exactly 2 hours, so you have plenty of time to have your say. There will be a choice of 4 nominees, so choose carefully – every vote counts!

Do you wish there was a way to follow the brilliant Twitter feed from the BucksWriter without having to open Twitter or navigate back to the homepage of the app? Well, now there is. The ‘Live’ section of the Live Game Centre includes a real-time Twitter feed so you can follow all the action whilst browsing the lineups or keeping a close eye on the in-game statistics.

One of the previous major problems with the previous Live Game Centre was the amount of time it took to load it. This has been slashed from up to 10 seconds to approximately 1.5 seconds (providing the user has a stable and secure internet connection). This means that the Live Game Centre is accessible within seconds – why not give it a go today?

In this update, we have added variety to the home screen hero image. A random function is used to decide who is shown in the image. Who will be on your homepage – Brad Bood? Russ Griffiths? Kai Williams? Log onto the app to find out!

So, what are you waiting for? Head to the app stores now to download the brand new version of ‘AFC Telford United – The App’ today!

*Please Note: There will be a large volume of new technology being deployed on Tuesday 8th February. Element16 Media acknowledges the fact that the current version will be a work in progress and may not function perfectly straight away. We thank users for their cooperation and feedback. 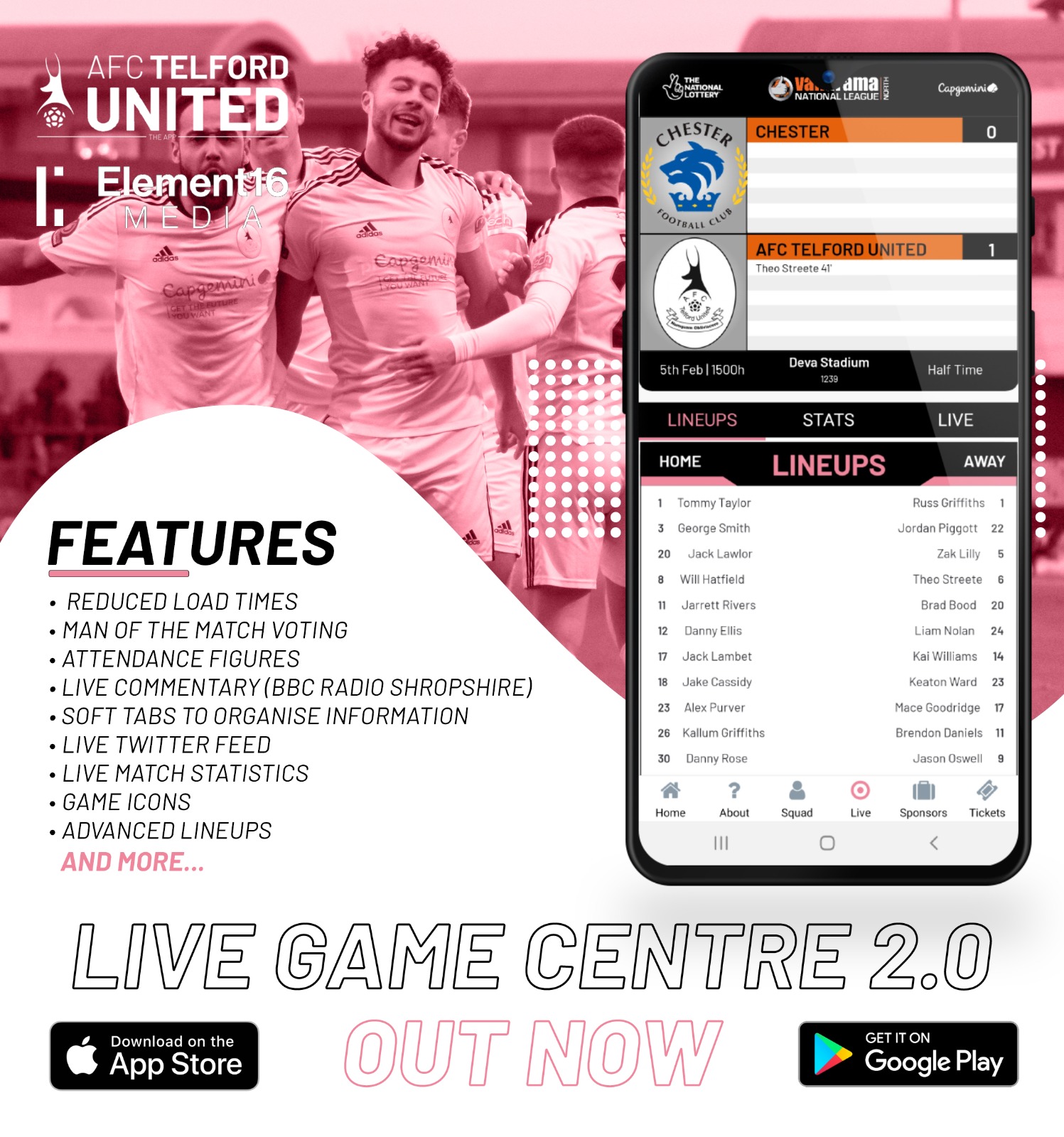 AFC Telford United are devastated to announce defender Arlen Birch has been ruled out for the rest...