The Bucks skipper has committed to the club for a third season following another impressive season for the Bucks where he made 49 appearances scoring 5 times.

Boss Gavin Cowan has also moved quickly to tie down 22 year old Ross White. The utility man has played a huge role in the team’s success this season having played in all 51 fixtures this season starting in 50 games out of the 51.

Speaking to the club website Ross White spoke of his new deal “ I am delighted to be committing to another 2 years at this fantastic club & I cant wait to get started again with what the gaffer has planned for next season. We unfortunately just fell short this year and that disappointment will only help to drive us on to more success next season”

The skipper also spoke of his delight “ I am delighted to have agreed a new deal with the club for the next 2 years. We have something building very special here with the players & staff and it’s a journey I want to be part of”

The club can also confirm Zak Lilly has agreed a further 1 year deal to keep at the New Bucks Head for the 2019/20 season. 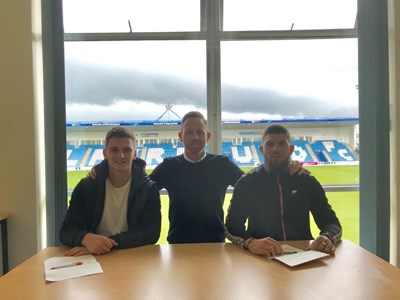 Your guide to a matchday at New Bucks Head. AFC Telford United welcome Spennymoor Town to the...

Despite AFC Telford United remaining in the dark over how and whether the current campaign will...

AFC Telford United are delighted to welcome full-back Arlen Birch to the New Bucks Head ahead of...