AFC Telford United are delighted to announce the signing of Adam Walker from Brackley Town.
The 28 year old midfielder joins the club on a one year deal from National North rivals Brackley Town.

Walker joined Nuneaton Town on loan in October 2009, before joining them on a permanent deal on 1 April 2010 after being released by Coventry City. Walker remained at Nuneaton for several seasons making over 250 appearances and was part of the promotion winning side to the National League during the 2011/ 2012 season.

The midfielder joined Gavin Cowan at Solihull Moors during the 2015/16 season and was part of the title winning season that won the league by 10 points. Adam joined Brackley Town in the summer of 2015 and has remained at the club for the last two seasons during that period he made over 70 appearances winning the FA Trophy.

Gavin Cowan spoke to the club website on his latest addition “Adam is someone who I have known for a long time and is a top player at this level. He is a winner and will bring not only ability but a real steel to what we do. To be attracting players of his calibre shows we are moving in the right direction”

Everyone at AFC Telford United would like to welcome Adam to the club. 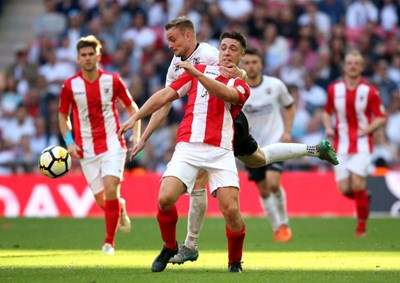