AFC Telford United are delighted to announce our latest new signing of the Summer, Aaron Williams from Harrogate Town
Aaron joins the Bucks on a two year deal from National League side Harrogate Town.

Despite being just 24 years old, Williams has scored over 100 career goals in a career that has included spells at Football League sides Walsall, Peterborough and Newport County.

The striker has also been capped at England C level. Williams was part of the Brackley Town side that missed out on Promotion to The National League during the 2017/18 season despite scoring 33 goals in all competitions, Aaron finished the season winning the FA Trophy at Wembley stadium.

The Sandwell born forward began his career at Walsall, during which time he enjoyed loan spells at Redditch United, Romulus and AFC Telford United.

After his release from Walsall, Williams signed for National League North side Worcester City; making a total of 49 appearances in his first season with the club.

It was at next club Rushall Olympic where Williams proved himself as a prolific goal scorer at senior level, netting 38 goals in all competitions and ending the season as NPL Premier Top Scorer.

A move back to the National League North with Nuneaton soon followed, before further impressive form in front of goal caught the attention of League One side Peterborough who captured the striker’s services in January 2016.

A change in Manager at his new club saw Williams return to Nuneaton the following Summer, though it wasn’t long before Aaron was recruited back in to The Football League as he joined Newport County. Williams joined Brackey Town on loan during the 2017/18 season where he scored 15 goals in 20 appearances.

Boss Gavin Cowan spoke to the club website on his latest signing “Signing Aaron, shows how far we have come in such a short space of time. Understandably, lots of clubs were in pursuit of his services but after numerous meetings between myself Aaron & his family he has decided AFC Telford United is the place for him. Every player we bring in has a strategic element to it with Aaron’s signing being an obvious one with goals. He’s another piece of the jigsaw and I am sure everyone with our club will welcome him with open arms”

Everyone at AFC Telford United would like to welcome Aaron back to the club. 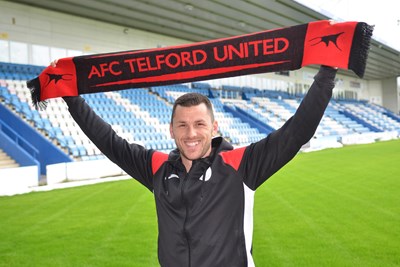