The Team That Helped to Build a Town 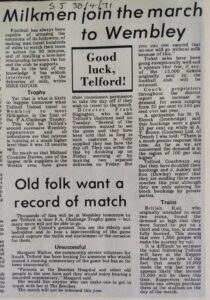 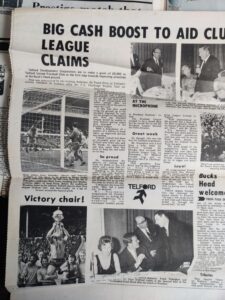 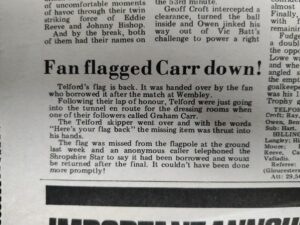 Half a century has passed since the day in 1971 when a group of young men helped to establish the new town of Telford onto the national map, in a sporting sense and perhaps in a wider sense too.

Telford United’s 3-2 victory over Hillingdon Borough at Wembley on 1st May 1971 came at the end of only the second season of the club bearing the name of Telford; club chairman Frank Nagington had welcomed the additional investment and support provided by the newly-founded Telford Development Corporation but at the cost of the club changing its name from Wellington Town, in a move that wasn’t hugely welcomed.

Telford entered the 1970/71 season having fallen short of being able to make a real impact in just their first season. They had finished in 8th position in the Southern League and had been runners-up in the inaugural season of the new FA Trophy competition. Previously, clubs at Telford’s level had competed for the FA Amateur Cup, but the advent of players being paid for being semi-professional meant that many were ineligible to enter the Amateur Cup. The new competition commenced in the 1969/70 season, with the Amateur Cup to exist for just a few seasons longer, eventually replaced by the FA Vase in 1974, when the distinction between amateur and semi-professional was abandoned, a sign of the changing world within football. In its early years the Trophy was not regarded as highly as the Amateur Cup, and struggled to viewed with the same prestige.

Nevertheless, the Lillywhites of Telford United set about making their mark on the competition, and ultimately building a reputation for the club as one of non-league’s ‘knock-out kings’. Their 2-0 defeat to Macclesfield in the competition’s debut season saw the Southern League lose out to the Northern League, but in the following season’s edition of the competition, they went about writing that wrong, and in some style.

The Route to Wembley

A first round tie with Bradford (Park Avenue), still an opponent for the modern-day AFC Telford United, resulted in a resounding 6-1 home victory, and in the second round they went one better, sending South Shields back to the North East following a 7-1 victory for the home side at the Buck’s Head.

The third round brought the club’s first away tie, and a trip to Burton Albion, now an EFL League One side. A 2-0 win for Telford gave them another away tie, this time at Tamworth, and Telford had to be content with a 1-1 draw in the first match before another victory by a big margin at home in the replay, by 6 goals to one.

The number of teams in the competition back then was modest, meaning that it only took Telford four ties to reach the semi-final. Their opponents for a return trip to Wembley were Yeovil Town, another team who have since progressed to the EFL, albeit having made the journey all the way to the Championship in recent seasons before descending once more to the National League.

A 3-1 victory for Telford at the neutral venue of West Bromwich Albion’s Hawthorns ground meant that the club were headed back to the twin towers for a second consecutive season.

Excitement for a Wembley return must have been palpable. Local newspapers reported, in a way that serves as a reminder of how times have changed, that the women of Telford were inundating wool shops, buying up all the available wool in the blue and amber colours to be worn by Telford, so as to knit their menfolk scarves for the day.

Chairman Frank Nagington, who operated Midland Counties Dairies depot at Cluddley, at the foot of the Wrekin, was a prominent figure in the coverage, and sought to reassure residents who received doorstep milk deliveries, that his club’s appearance at Wembley would not go without their daily pinta.

“Several of the roundsmen wanted to see the game and they have been told that as long as each customer is fully supplied, they can have the day off. They can either do this by either doubling up on Friday morning or by making two separate deliveries on Friday. But you can rest assured that no-one will go without milk because of this.”

As my own father worked for Midland Counties, and with our own milk delivery being received daily from Telford midfielder Brian Hart, this story in particular stood out, but there are hundred of recollections, and I have been fortunate enough to have chance to peruse them, thanks to Telford fan Derrick Moore, a volunteer at the club that has held a place in his heart for in excess of 50 years.

On the day itself, Telford lined up as follows, with Brian Hart a substitute on the day:

Telford hadn’t been behind in any of the seven matches they’d played to reach Wembley, so conceding to Hiilingdon’s Reeve after 17 minutes might have been expected to give them a few moments of self-doubt; were Telford about to face a second loss in the final just 12 months after their first?

A second goal for Hillingdon arrived two minutes before half-time, Bishop the scorer, and Telford looked to be up against it, but an interview with Flowers given after the game shed some light onto what the player-coach had told his team to inspire them into the contest:

“I told them they could get more into the game; after all, they play on some Southern League pitches which are not so good and the ball bobs about, but on this pitch they had the ability to push it about and play a good game.”

One of the players, not identified in the newspaper, backed that up, suggesting that the players took their inspiration from those words:

“He told us off alright – but in a nice way. He told us me must be able to play football on such a good field and gave us the confidence to go out and get at them.”

Telford responded to Flowers and began to bloom; given their situation, most people would feel that they needed a goal early in the half and that’s what they got when Joey Owen, who formed a fine partnership with Jack Bentley, beat full-back Batt and struck a low shot from just inside the area to beat the keeper, appropriately named Lowe.

With the deficit reduced to one goal, Telford went about their task but were continually frustrated by the Hillingdon defence. With only eight minutes remaining in the game, it looked as though Telford were to be denied the prize for a second season, but they had no intention of being the ‘nearly’ men and when Paul Coton’s cross wasn’t dealt with by Lowe, legendary forward Jack Bentley employed his trademark finish by heading the ball into the net to level the scores.

If that goal brought a sigh of relief and exhilaration, what followed was to surpass it. With fewer than five minutes remaining, Owen’s low cross through the Hillingdon penalty area looked to be running out of play to safety but, doing much more than retrieve the ball, Telford winger Mickey Fudge packed a final punch and thumped the ball beyond Lowe to give Telford the glory.

The celebrations as captain Graham Carr collected the FA Trophy spoke of a tale of redemption following the previous season’s final defeat, and rewarded all those involved with the club, but it did much more besides. The Bucks of the 1970/71 season laid a foundation stone for the club’s subsequent successes, and they also meant that when the name ‘Telford’ appeared in the national newspapers or on BBC One’s ‘Final Score’, there was no longer a question as to where the town was. Sir Frank Price, chairman of Telford Development Corporation, described the victory as ‘fantastic’, and to this day the feeling remains that Telford’s victory achieved so much in truly putting Telford on the map. Traditionalists would doubtless still feel disappointment that the victory wasn’t achieved in the name of Wellington Town, but a new era had begun in the new town. 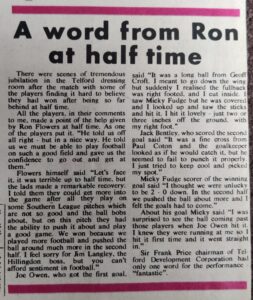 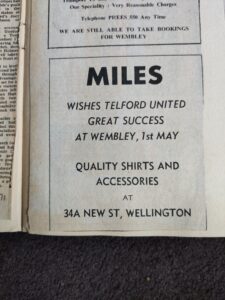 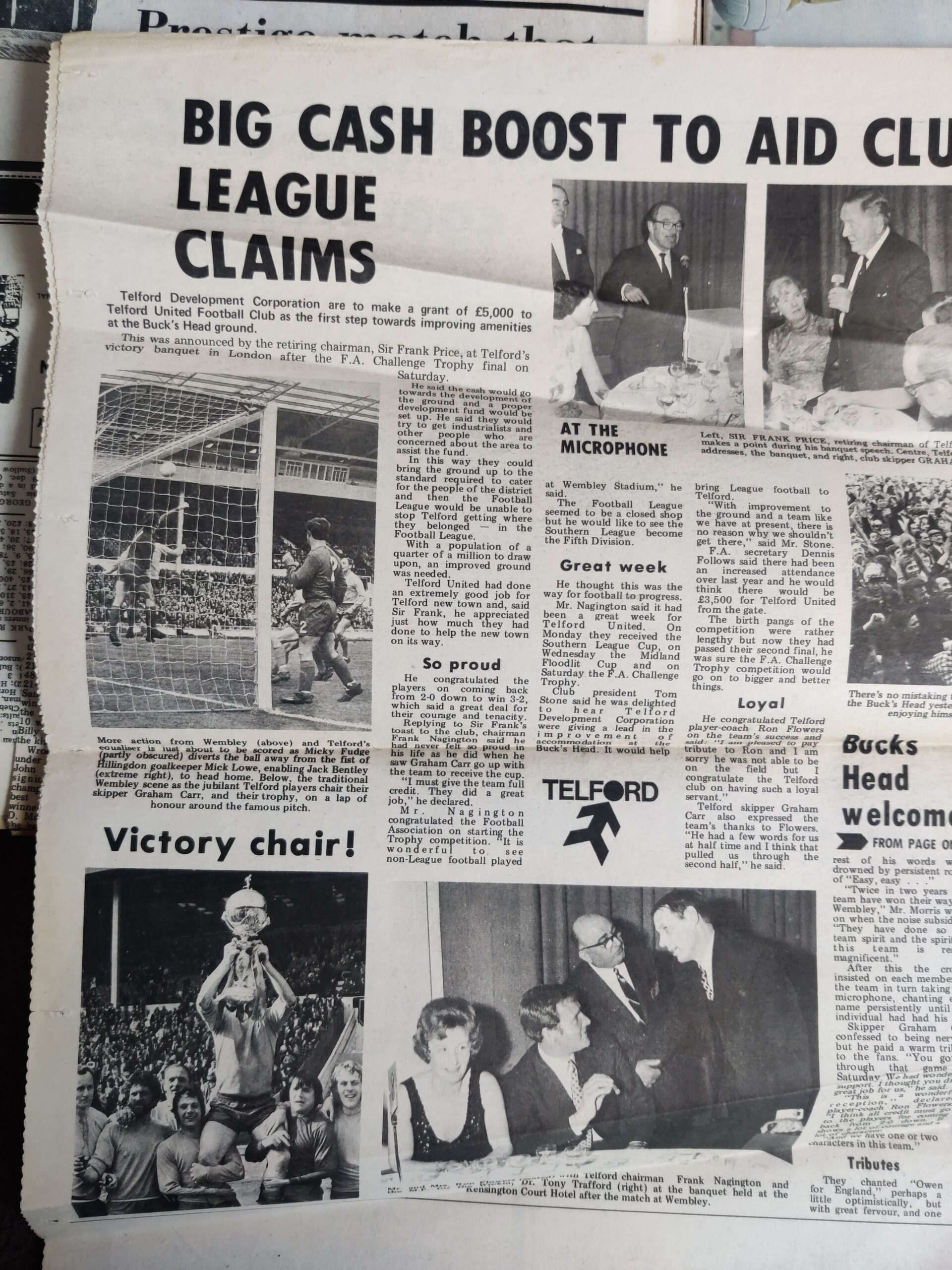 AFC Telford United would like to issue the following statement to the National League Firstly,...

AFC Telford United can confirm Aaron Williams and Courtney Meppen-Walters will not be offered new...