York City recorded three points as AFC Telford    who came so close to walking away with something had to suffer conceding two late goals in a two nil loss.

The goal came when Elliot Durrell found some room at the far post after a cross evaded the Bucks defence before the substitute who just came on tapped in with Matt Yates scrambling to keep the ball out of the goal but subsequently failed.

The second goal came in injury time where James Burrows kept control of the ball before floating a shot past Yates from just inside the box; as Theo Streete tried his best efforts to hook the ball away before it eventually found its way into the net.

Streete had the Bucks best chance of the match with the defender rising highest at a corner and at a glance flicked his header a few inches away from the goal, with Streete acknowledging he probably should’ve scored.

Alex Kempster was presented with a real opening mid way thought the half with him having all the time to direct the ball goalwards following a long ball as the winger skied his effort well over the bar.

Shane Sutton had a header easily caught by Peter Jameson in the York goal with the best of the action for the Bucks coming from dead ball occurrences which they were unable to make any of their threatening play count for something.

Manager Gavin Cowan believes that they deserved to take something from the game and was pleased with how the players lived up to his expectations however is disappointed that they couldn’t quite get the result to walk away from the game with.

He said:“I’m gutted for the players, their attitude and application was first class today and I think they played out the game strategy well but again we’re talking about fine margins. In the grand scheme of things were not even on the same level as York City.

“Today we showed that we matched them and I think over the course of the game we had more chances, the lads played it brilliantly and it’s just disappointing to not come away with something because I feel we deserved it.”

Gavin says how the performance was similar to last week in ways however with an improvement on the ball which saw the Bucks attack with more urgency and purpose. Gavin also thinks that letting them have the ball worked well within their adopted tactics and it allowed them to harm them on the break when going forward.

“I think we really built on the performance from Brackley where again I think we deserved something, today I thought we were a lot better at lending a pass where the ball was turned over and we regained possession and then I felt like the ball forward was with a lot more quality.

“Sometimes when you are hard to beat and the opposition have the ball that’s when the opposition are the most vulnerable, they’re a very hard working team out of possession so we let them have the ball and I think we were great at retaining the ball in their half and that we moved it well.”

6-No real chances so far with a compact opening few minutes from the Bucks as the Minstermen try to work their way into the game.

19- Theo Streete from a corner leaps highest and is left unmarked which takes him by surprise as his header from point blank range goes wide by the narrowest of margins.

24- Alex Kempster gets on the end of a flick on inside the box before firing the ball well over the bar; then Kieran Green has the ball on the edge of the box before forcing Matt Yates into a save as he turned the ball over for a corner.

39- York with a heavy spell of pressure and have looked dangerous at times with the Bucks  back line doing their jobs well. The shots have been from distance and whenever the ball comes into the box Telford men are determined to not leak any unwanted chances.

41-Steve McNulty with a header from a corner as the ball loops up and thankfully for the Bucks just over.

65- Kempster with the low drive as he gets a faint flick on a cross from the right yet it bobbles out for a goal kick.

75- Shane Sutton with a header after he met a Brendon Daniels cross with Peter Jameson standing his ground to block the header with his body.

80- Macaulay Longstaff with a real chance after he breaks free and an outstretched leg isn’t enough to guide it into the left hand post.

82 Goal!- Elliot Durrell finally breaks the deadlock with a well timed run at the back post as he flaunts a shot goalwards and Yates can’t do enough to keep it out.

88-Goal!- James Burrows with a remarkable finish before he flicks the ball over Yates and beats the keeper comfortably as it makes its way into the goal. 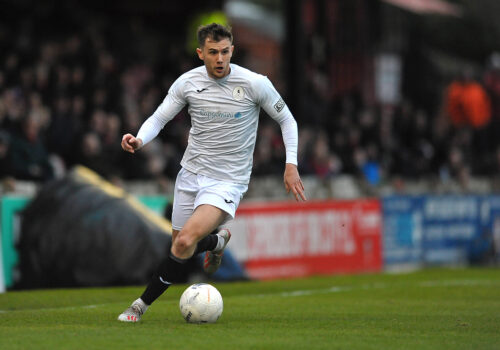 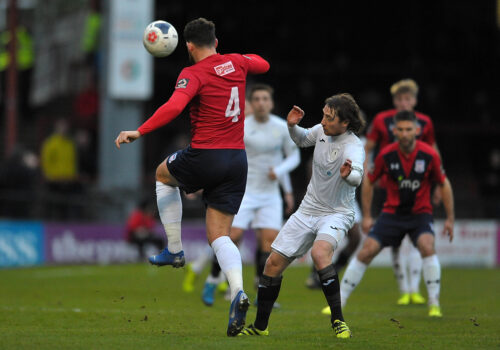 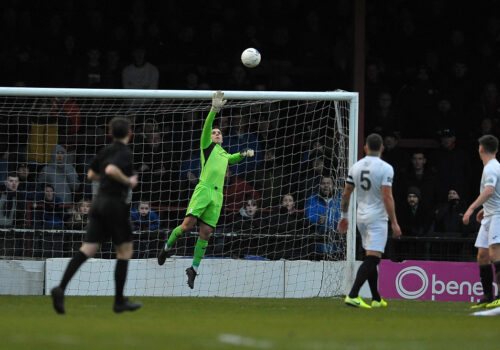 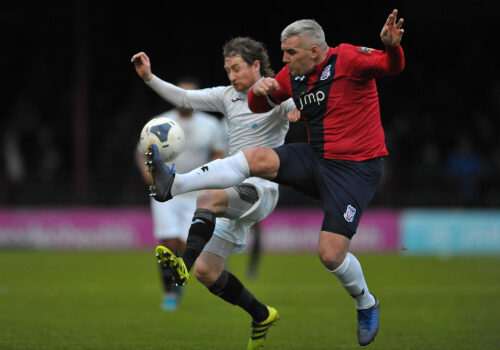 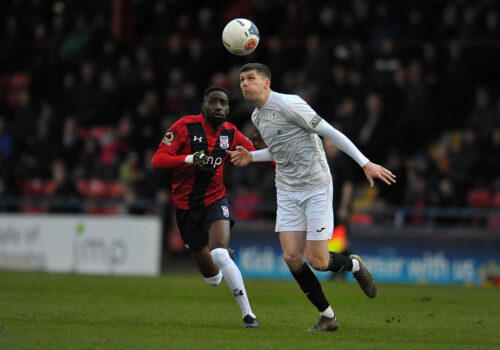 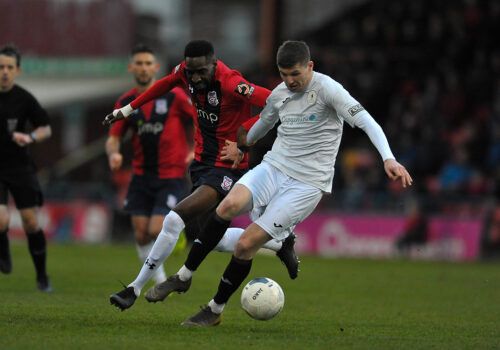 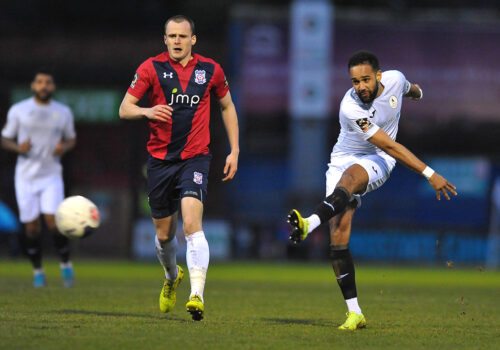 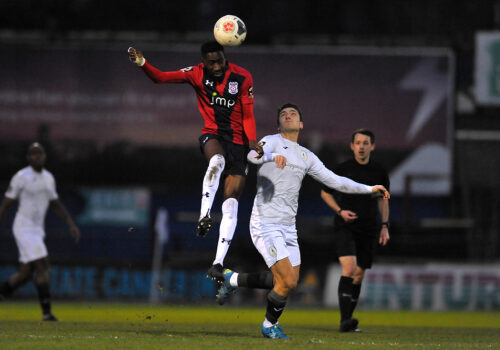 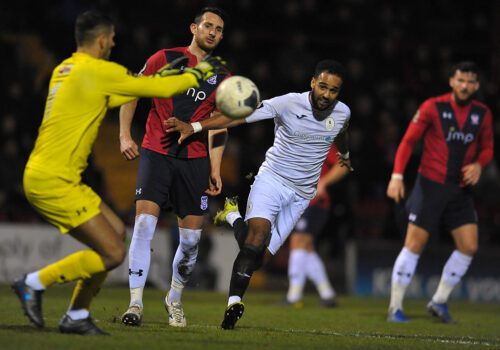 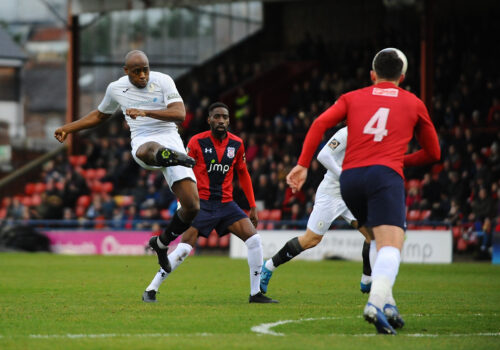 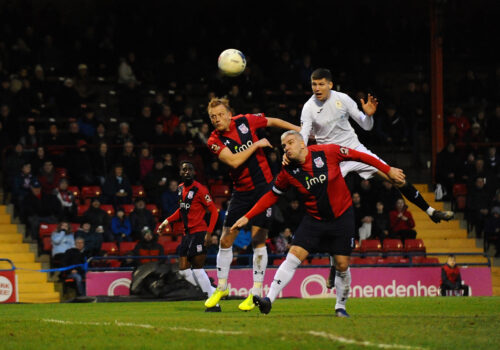 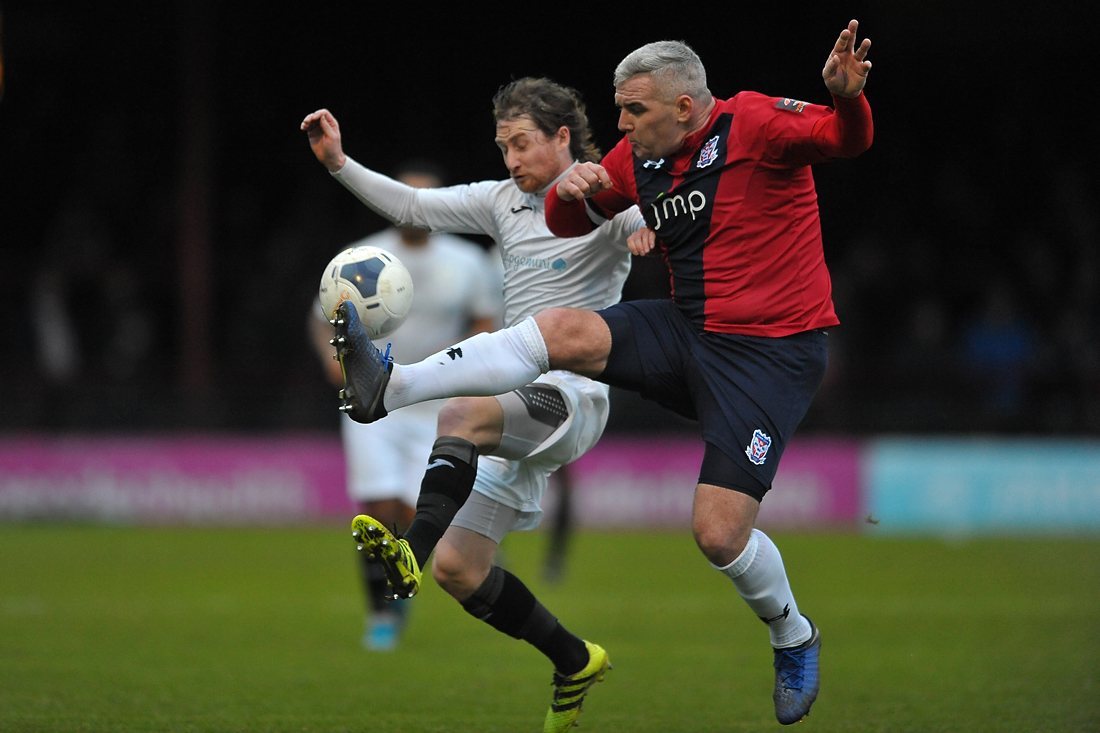