AFC Telford managed to rescue a two-goal deficit as they came from 2-0 down against Spennymoor Town with it been honours even in their matchup at New Bucks Head.

The Bucks scored the leveller in the early knockings of the second half, when the towering centre half Billy Sass Davies was ahead of his marker as he attacked a James McQuilkin corner by heading the ball home. As he mid headed the ball however still did enough to get a slight touch of fortune as it crossed the goal line.

The Bucks were quick to reply after initially going behind and finally got a deserved goal through Adam Walker, when a sliced at clearance went to Walker in the box who set up his feet before dinking the ball upwards as it came down at the goal.

The Bucks went behind early on after a penalty was awarded in favour of the Moors following James Roberts who had a quick outburst of speed as he was later tripped by Riccardo Clader. Glenn Taylor made no mistake with the finish as his emphatic penalty was tucked right into the left-hand side.

They went two nil up when Taylor flicked on a long ball before Calder was once again left behind by Roberts who got himself in on the action as the ball fell through the body of Matt Yates before Roberts simply applied the telling contribution.

The Bucks had several chances beforehand with Walker again involved as he saw his effort cleared of the line, the shot was inside the box had the goalkeeper beaten just not the defender who did incredibly well to get the key block done.

Matt Stenson hit the post as his effort from outside the box rattled the crossbar after he was allowed more space than he normally would have, as his pinpoint strike in the end was just a little bit too high for it to go goalwards.

Manager Gavin Cowan’s said following the performance that he was happy with the effort and to pull the game back after overturning a difficult margin was credit to the team. He was also happy with the work ethic that the players had been putting in all week with their character standing out.

“It’s one point at home, you ask for three. What I asked from the players before the game was a performance and I thought they did that. I think we lacked a bit of first contact defensively, all over the pitch.

“It’s difficult because we are two nil down and the lads started to think here, we go again because we have been that unlucky team over recent weeks. It’s credit to the players I have got to say it’s all down to them, they have worked so hard during the week, their character, it’s the best changing room I had since I have been here. They’re all together and desperate to do well.”

He then went onto to say that working hard and the strong mentality of the team was what he asked for; it was important to control the levels of performances by ensuring they weren’t using feeling sorry for themselves as an excuse.

“The way to turn it around was too work hard, show some desire, work for each other and be together. I thought it was funny actually we were just having a chat in the changing room, as Arlen got the ball of the far right on the mid phase and a ball went to Billy and things started to go our away.

“Those little things and fine margins, if they are not going your way you can feel sorry for yourselves. We have to take responsibility and control the controllable’s and I think we did that today. For me personally I think we should have won the game.”

2-Roberts played in behind with the effort from inside the box been dragged wide to the left.

11- Roberts tripped over on the left as he is fouled by Calder and the referee doesn’t hesitate to point to the spot.

12-Goal!-Taylor converts the penalty with an emphatic finish as he tucks it right into the left corner.

15- Williams with a crack at goal from outside the box as he forces the goalkeeper into a save with the follow up from Stenson going down as offside.

18-McQuilkin on the fall takes a strike as Gould reads the danger and gets a hand to push it wide.

24-goal!-Roberts joins in on the action following on from a poor first lost ball where he gets the ball through Yates before tapping it over the line.

26-Walker was adamant the ball went over the line from his shot before a opponent is there to quickly smash the ball away. The referee has none of it.

28- Yates with a fine stop in the goal to stop a furious header from a opposition defender.

39- Goal!-Walker with an effort as he hits the hall with the outside his foot which sees the ball fly into the top corner.

45-Stenson gets the ball from outside of the box and then shoots away which clips the bar before bouncing back down, unfortunately for him it’s the wrong side of the goal line.

47- Goal!- The ball ends up in the back of the net from a corner taken by McQuilkin as it’s looks like Sass Davies wins the header at first; but eventually takes a nick off a Spennymoor player before it finds it way in.

62- Birch sent away on goal as he only hits the shot at the goalkeeper from inside the box with the chances going begging.

87-Wycherley gets down to his left to prevent an effort from Ramshaw sneaking in at the near post. 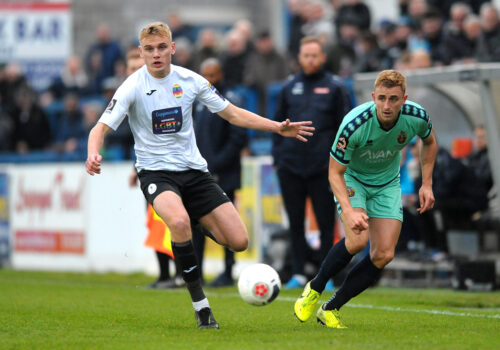 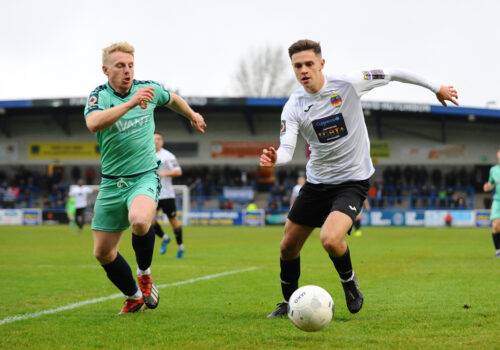 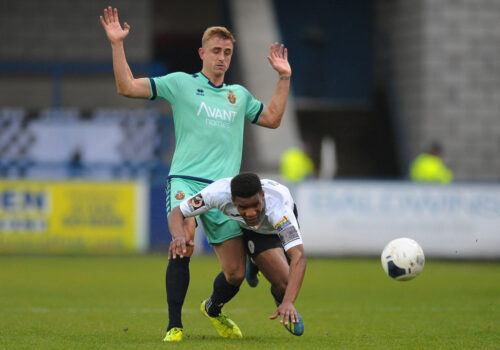 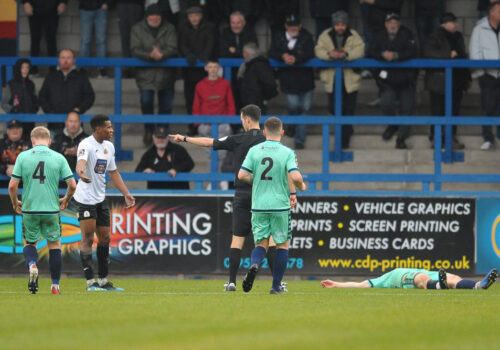 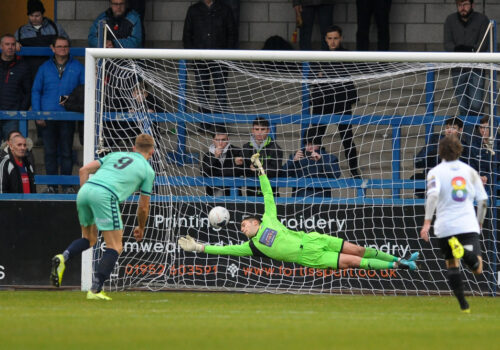 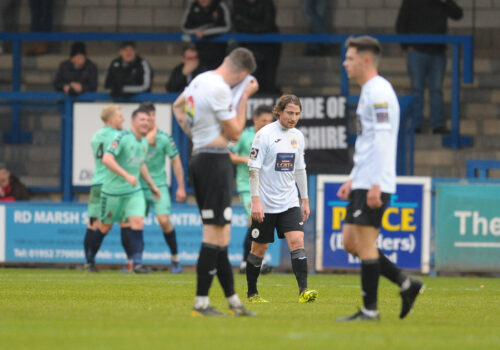 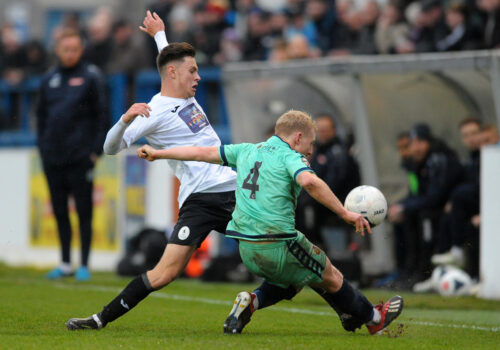 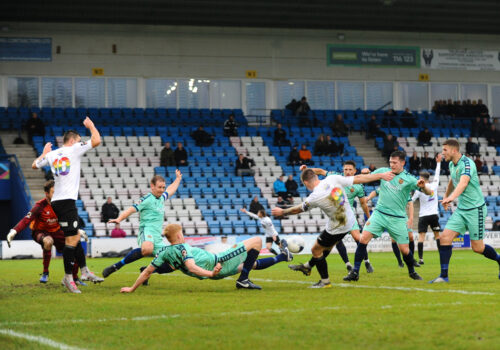 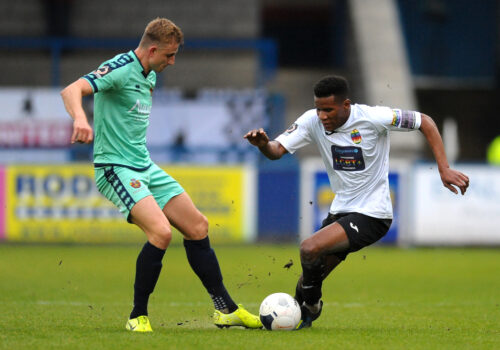 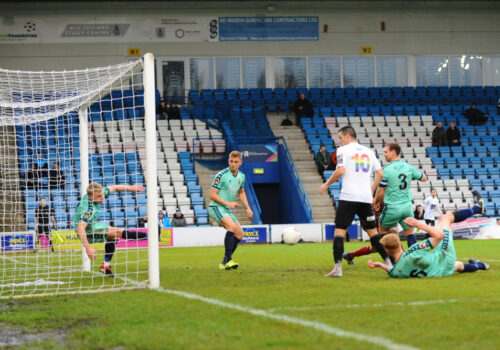 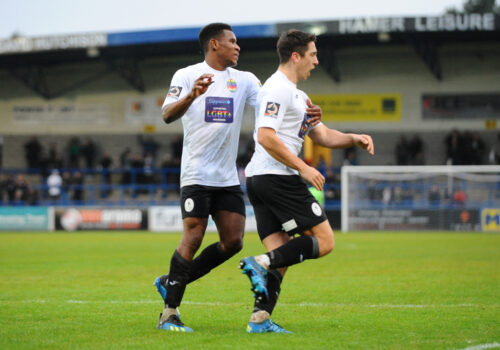 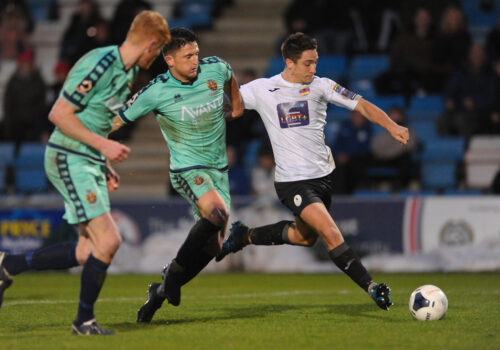 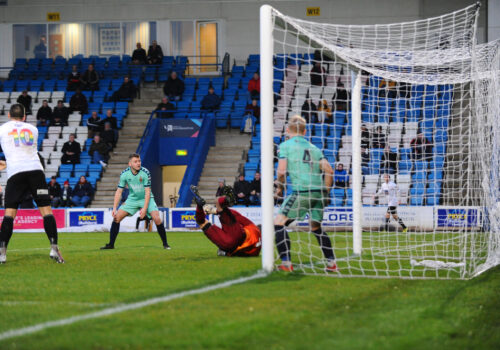 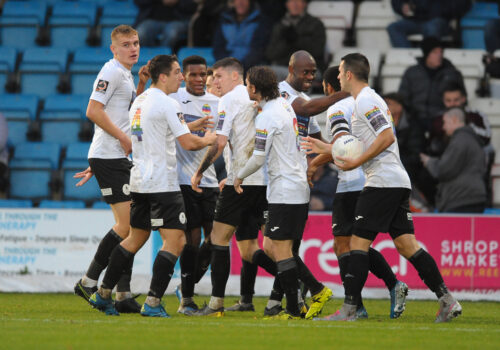 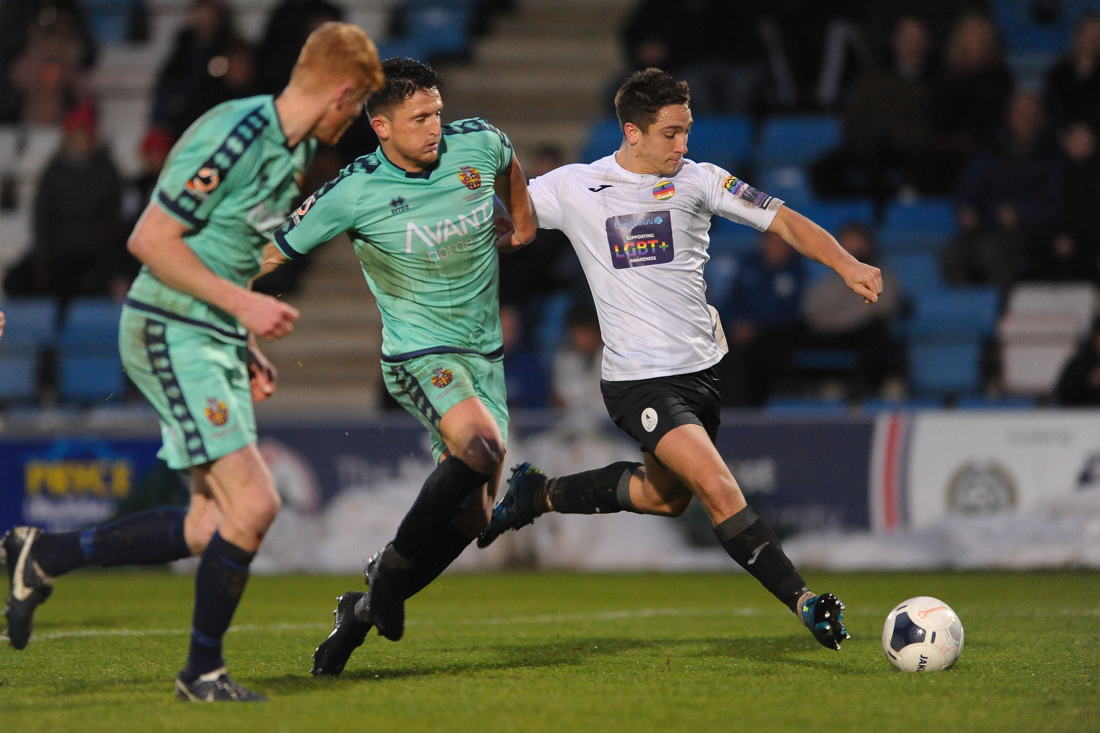