Around the corner from Blyth’s Croft Park ground is a mural of club legend Robbie Dale, painted onto the side of a local fish and chip shop. Dale didn’t exactly batter Telford, but when he despatched an 86th minute shot into the Bucks net, the visitors surely knew they’d had their chips.

Dale’s goal rewarded the hosts for a second-half where they gave the Bucks no respite, and they earned their reward. The goal was harsh on Telford keeper Russ Griffiths, who produced one of his best displays in a Bucks shirt to deny the Spartans. The added indignity of a Theo Streete Pond own goal in injury time just rubbed salt, but no vinegar, into the Bucks’ wounds.

Manager Gavin Cowan was dissatisfied with his team’s performance, feeling his team got what they deserved. He had the additional concern of seeing substitute Brendon Daniels leave the field come on and then depart again only seven minutes later; Daniels has been beset with injury setbacks in the last 12 months, and the distress on his face was evident.

Jason Oswell’s suspension for his dismissal last weekend meant an opportunity for Matthew Barnes-Homer in the forward line, whilst the only other change saw Brad Bood drop out, replaced by Dom McHale as the Bucks switched to a back four.

The early stages were evenly contested, with the Bucks’ Elliott Durrell making home keeper Alex Mitchell stretch to hold his cheeky attempt to lift the ball over him from the left side of the penalty area. Blyth’s Dan Maguire hadn’t found his range when firing the ball over the crossbar from distance, but the hosts soon went close. On 13 minutes, Griffiths produced a superb save, diving to his left to claw away a header from JJ O’Donnell when he connected with a free-kick from the Blyth right.

That moment got the home crowd properly involved, and just five minutes later Griffiths was again excellent, saving to his left again when a ball from the right across an exposed backline found O’Donnell in space; his aim wasn’t quite true, but full credit was due to Griffiths, who came quickly off his line to narrow his angles and deny the same player once more.

The hosts were slowly turning the screw, although they weren’t to create any more chances in the first half that was as clear-cut as the two saved by Telford’s custodian.

The Bucks had efforts of their own, too. Barnes-Homer’s hold-up play and chest control to lay the ball to McHale resulted in a crisp, low shot that was narrowly deflected wide of Mitchell’s right post.

Nathan Pond almost directed a clearance into his own net from a Blyth cross, as the half wore on, and on 39 minutes the Bucks had a glorious chance. Jordan Watson’s error in possession saw Durrell steal away with the ball within sight of goal, and when he let fly, Mitchell was equal to his effort, down to his left to turn the ball away when a Bucks half-time lead looked on the cards.

There was time for one more Bucks effort on goal, as they recovered possession following a corner and a cross dropped at Theo Streete’s feet at the far post. The big defender had found the net a week ago, but this was a much sharper chance, and his snatched effort on the volley flew over the roof of the stand.

Goalless at the interval, the Bucks seemed reasonably content, but it was to prove more a case of ‘out of the frying pan, and into the deep-fat fryer’.

Within minutes of the restart, Blyth turned up the heat. Griffiths was once again busy, saving from Nicky Deverdics, who aimed a shot across the big keeper, only to see his right hand push away his effort. Cowan appeared vexed with his team and made a substitution, replacing experience with a little more youth and pace as Kyle Bennett made way for Kai Williams.

The home crowd were warming to their side’s persistence; they also did their best to influence referee John Mulligan, who didn’t bow to their demands for action to curb the Bucks game management. They also bayed for a penalty when O’Donnell felt the force of Griffiths when the keeper punched the ball away and also caught the Spartans no.10 in doing so.

The Bucks were being forced to absorb a lot of Blyth pressure, with little happening for them when they made rare forays towards Mitchell’s goal. Daniels came on for McHale but had to leave the field again soon after, and appeared almost in tears as Tyrell Hamilton replaced him.

It mattered little who was in the final third for the Bucks, as the ball just wouldn’t stay at that end of the field. Blyth weren’t cutting them open but were just wearing the Bucks down slowly, with O’Donnell scuffing a shot at Griffiths that may have come back off the post.

With just four minutes remaining, Blyth earned their reward; a ball into the Bucks’ penalty area travelled to Dale at the far post and the veteran striker, tempted out of retirement by manager Michael Nelson, kept his cool to strike an angled shot that Griffiths just couldn’t keep out.

The relief and jubilation inside Croft Park were palpable, and the Bucks knew time was against them. Durrell wriggled free but saw his shot from distance blocked, but 2 minutes into injury time the Bucks’ goose was cooked.

Over-committed in search of an equaliser, they had only Arlen Birch in defence as Blyth cleared and counter-attacked. Birch did well and looked to have held them up, but they slipped the ball through to substitute Lewis McNall in acres of room; Griffiths denied his shot but as the ball ran loose, it struck the shins of covering defender Streete and trickled into the goal as he staggered, trying to recover.

Williams brought a save from Mitchell with virtually the last touch of the game, but it was too little, too late for the Bucks. They simply couldn’t deny the irresistible force of Dale, and had to face the writing was on the wall, as well as the image of their tormentor. 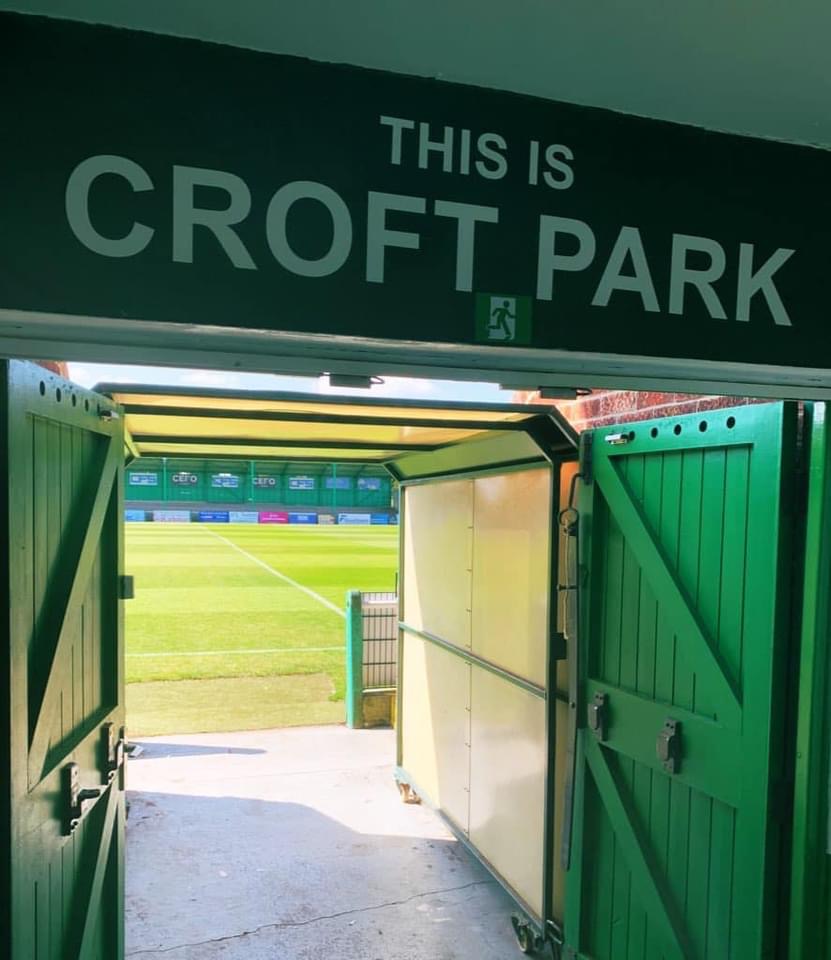